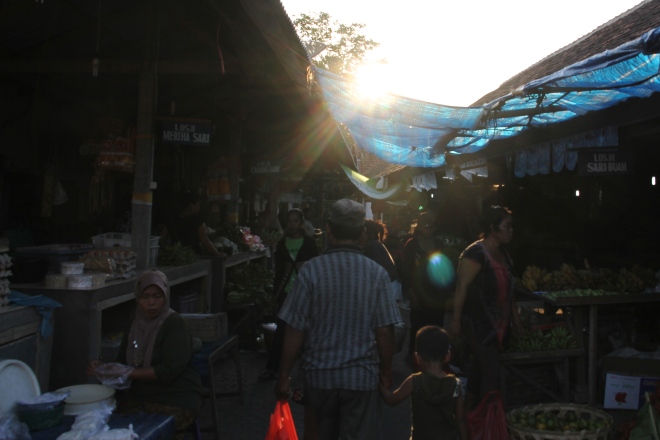 We arrived in Bali at the beginning of the dry season. While the rice paddies were vibrant green, much of the hillside was a very dry brown. As a tourist, I hope for a rain-free visit, but I can appreciate the importance of the rainy season to the environment and to the farmers. Along the roadside we passed small farms with cows, pigs, and chickens. These chickens bring new meaning to ‘free-range’ as they roam here, there and everywhere, with all different breeds mixed together. One chicken even flew into our car as we drove by – I know, you’re saying ‘a flying chicken?’, but it really did happen. We also had to stop the car once to allow a chicken to cross the road. Yes, really. And we had to stop for a large lizard, a flock of geese, and some monkeys. I thought the motorbikes were the road hazard, but it appears animals can cause just as many traffic jams. 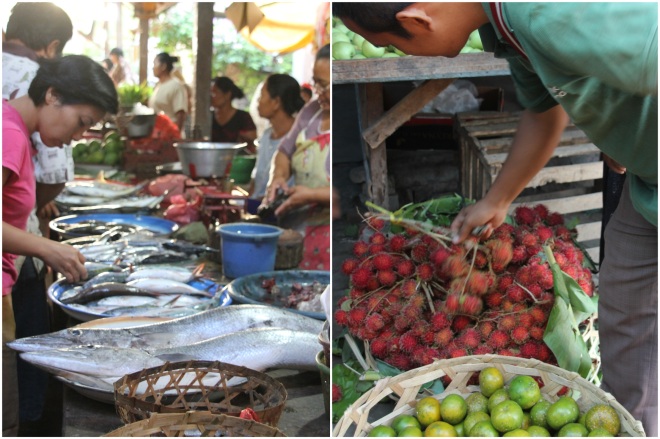 Our guide Putra took us to Bali Re, just west of Pemuteran, to a local market. The maze-like set up offered rows and rows of vendors with fruits, vegetables, spices, peanuts, and fish. There were many fruits we recognized, like mangos (only $1 for a kilo), and many that were exotic, like jackfruit and rambutan. Locals shop every one or two days for fresh ingredients. We saw some enterprising Balinese load the back of their motorbikes with a specially fitted woven box to carry produce, which they will re-sell to people who cannot make it to the market to shop themselves. 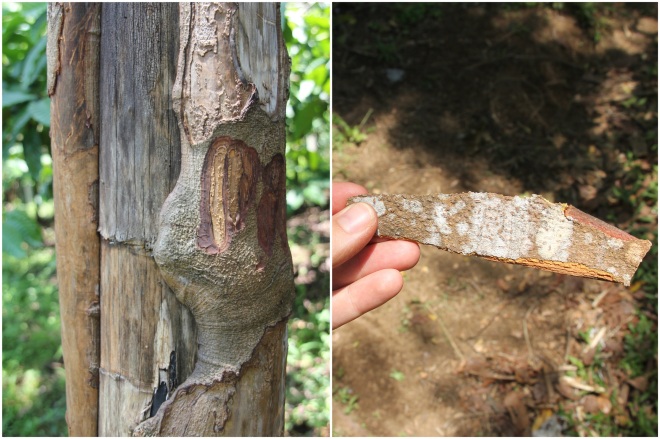 A day trip to Java took us along roads lined with beehives, leading to a wonderfully productive mixed rainforest growing Arabica coffee and cinnamon. Cinnamon is the dried bark of the cinnamon tree. There are two species of cinnamon trees, with cinnamon cassia, often called a cassia tree, being the more common, but considered to be of lesser quality. Unless you are seeking out true cinnamon, much of what we buy is cassia labeled as cinnamon. To harvest the spice, first the outer bark of the tree is removed, and then the inner bark, which is dried and rolled into the cinnamon sticks we are familiar with, sometimes also called quills. Holding a fresh piece of bark, right off the tree, I was surprised as the citrus notes, like orange zest, that I could smell. The bark is moist and very light in colour on the interior side. Apparently it dries quite quickly, so must be processed and rolled shortly after the bark is pulled from the tree or it will dry out. The bark can also be ground to make powdered cinnamon. 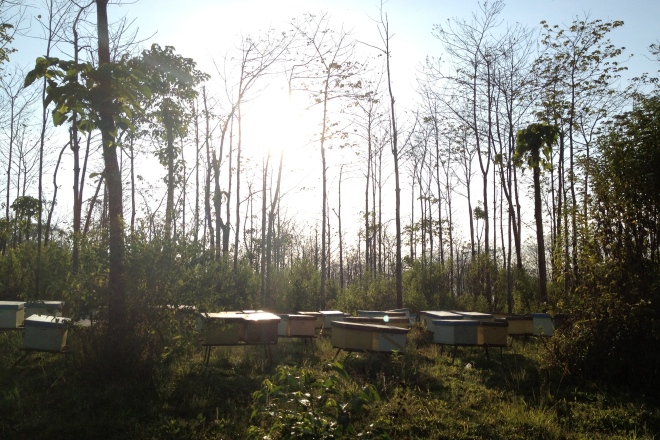 Along the side of the road were many beehives, set out in single layers, not stacked like we often see at home. It can get pretty hot in there with all those buzzing busy bees, so add the Indonesian sun, and it could become a bee sauna. It turns out that Indonesian bees are actually a different species, related to the giant honeybee. One study showed that Indoensian honey had comparable antibacterial and healing effectiveness to the popular Manuka honey from New Zealand. Perhaps we’ll soon be seeing more Indonesian honey on the shelves back home. 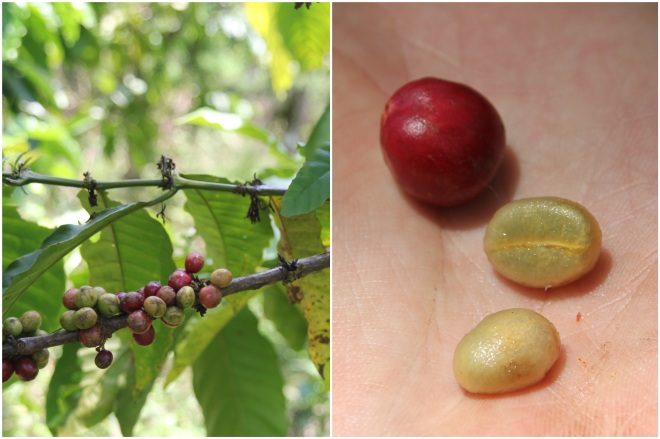 In east Java, the Arabica coffee variety is widely grown. Now I know why we sometimes refer to a cup of coffee as a ‘cup of java’. Coffee beans are actually the seed or pit found inside the red coffee fruit, often called a coffee cherry. The seeds are white, and then roasted to become the dark brown ‘bean’ we are used to seeing. 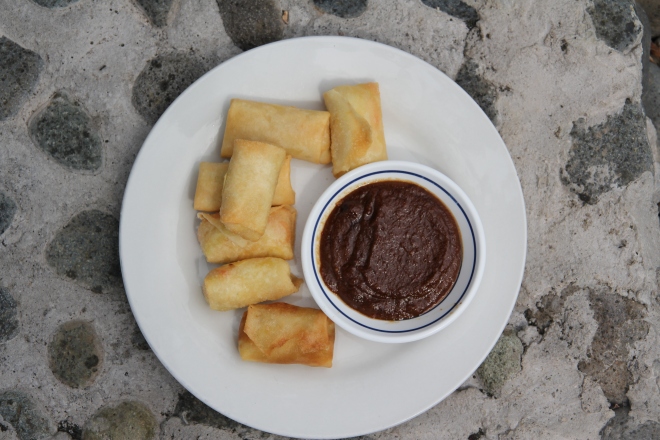 It hasn’t all been just seeing the flavours of Indonesia. There’s been lots of tasting too. So far my favourite two dishes are Nasi Goreng and Balinese peanut sauce (not really a dish, but a super delicious addition to many of the dishes we’ve enjoyed).

Remember in the early 2000s, when we were all excited about President’s Choice Memories of Szechuan sauce? Well, Balinese peanut sauce puts it to shame. It is rich in flavor and much deeper and darker in colour. We have enjoyed it with veggies, with satays, and with lumpia, a Balinese spring roll. I am very happy to say that Jero, a wonderful Balinese cook, showed me how to make it. Recipe to come soon. Like me, Jero doesn’t really cook off of a recipe. She just uses a little of that, some more of this. So I am working out quantities for the recipe. And figuring out how to recreate kecap manis, a sweet soy sauce, that is common in Indonesian dishes.

Which leads me to Nasi Goreng, considered by some to be the national dish of Indonesia. With over 237 million people spread across more than 17,000 islands, I can imagine it would be difficult to find one dish they all shared. But as Nasi Goreng translates to ‘fried rice’, it is a simple and versatile dish that can be adjusted to create many variations. The basic ingredients are stir-fried rice, sauces, and vegetables, seafood, or chicken. Jero also showed me how she makes Nasi Goreng. Again, recipe in the works. This dish also calls for kecap manis, so all the more reason to find a Toronto-friendly way to recreate a similar flavour.

The exploration continues, as I head to northeast Bali to an area known for its small fishing villages. Until then, silahkan menikmati. 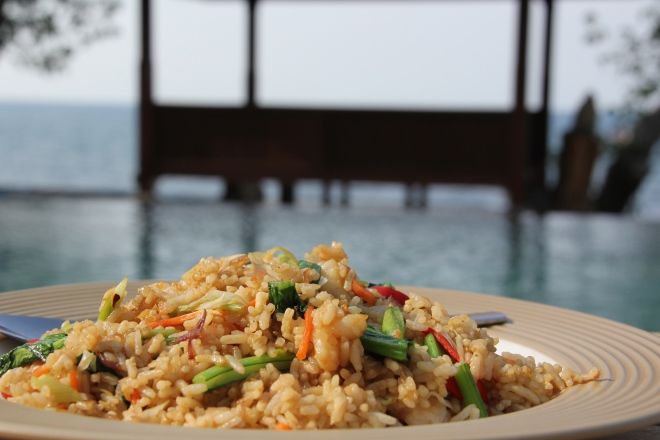